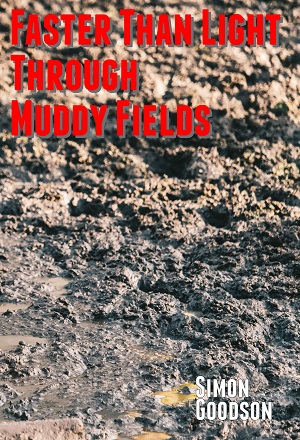 The epic story of one man’s battle against mud…

…and the fabric of spacetime itself!

Sylvie knocked back another shot, her fifth in ten minutes, and decided that this time she was going to go for it.

She grimaced.  Just like she’d decided after the first four shots.  Each one had given her a burst of confidence.  Each time she’d stood and started walking towards the man she wanted to speak to… and seeing his world-renowned face she’d become horribly aware of her own youth and inexperience, faltered, and returned to her bar stool.

Not this time! This time she was going to do it! If for no other reason than another shot would probably make her slur her speech to the point of unintelligibility.

She got off the stool and started to walk across the bar.  It was quiet.  Not empty, but far from busy.  And it was far from the type of place she would have expected to see Sir Lance Dupree drinking.

But he was here.  She’d watched him drinking with two friends for the past two hours, two friends who had now left.  Not surprisingly.  It was getting late.  But he had carried on drinking, slowly but steadily.  When his friends left she’d seen her chance.  She just had to take it.

When she’d covered half the distance to him, far more than she’d managed the first four times, his eyes locked on to hers.  Her steps faltered, but he made no obvious sign he didn’t want her to approach.

He didn’t make any sign she would be welcome either, but she forced herself to take the lack of any response as encouragement.  Sir Lance was renowned for his reluctance to talk to reporters.  To anyone he didn’t know.  She couldn’t believe how lucky she was to have stumbled on him in this state.  And at this time.

If she could get him to answer a few questions, just three or four, her career would be assured.  It certainly needed the help.  Despite her best efforts she’d had very little success breaking into the world of interviewing.

She carried on, heart starting to hammer but determined not to give up.  As she got closer she became aware of just how tall he was.  Even sitting down he was not much shorter than she was standing.  As she drew close he stood and nodded to her.

She found herself tongue-tied, unable to speak, then got a grip on herself.  If she messed up this chance by not even asking if she could ask questions then she didn’t deserve to make it as a reporter.

“Sir Lance,” she said.  “I was hoping… I was wondering… I know you don’t normally, but would you mind me asking some questions? Um… for an interview I mean… if it’s not too much trouble… sorry, I don’t mean to intrude.”

Just wonderful! How could he possibly resist being interviewed by someone who was clearly unable to string a sentence together! And sure enough his face fell.

“Oh,” he said.  “I thought… that is, well I thought you were coming over to make a totally different sort of proposition.”

Her heart sank as she stared at him.  He’d thought that she came over because she fancied him? All right, he wasn’t that bad looking for a man into his sixties, but she was barely twenty-five! She couldn’t even begin to think of him in that way.  But how could she tell him that without hurting his feelings and blowing every chance of an interview?

As she hesitated his eyes widened, then a few seconds later he started chuckling.  He shook his head.

“I’m sorry,” he said.  “That was mean of me.  I just couldn’t resist.  Don’t worry, I have granddaughters who aren’t far off your age.  The idea of anything romantic happening between us is probably as repugnant to me as it would be to you.  I don’t mean that you’re not attractive, but you’re just so young!”

Sylvie let out a sigh of relief and shook her head.

“It was a little mean,” she said, seeing an opportunity.  “So in return could I at least get you to answer a question or two?”

“I suppose it would only be fair.  I tell you what, as I’m in a particularly good mood I’ll give you two questions.  You can take notes, but no recordings.  I’ll be happy to authenticate your notes with my signature at the end, but anything recorded just ends up circling for years and being picked apart by everyone to mean a hundred different things I never intended to say.”

“Well then, let’s sit down and let me get both of us another drink.  Then we can start.”

She settled down across the small table from him, still not quite believing she was sitting so close to the Sir Lance Dupree.

Within moments the drinks were delivered, even though she hadn’t made a choice.  She realised it was the same thing she’d been drinking before she moved onto the shots.  Was that his doing?  Or the bartender’s?  Before she could decide, he had lifted his drink.

She raised her own glass and echoed his words.  “To The Hundred.”

That was the reason an interview with him now would be so valuable to her career.  Humanity had just established a permanent settlement in its one hundredth star system, if you counted the earth and its system as the first.  And humanity wouldn’t have reached one new system yet without the man sitting across from her.  Let alone settled ninety-nine.

“Is that why you’re drinking tonight?” she asked.  “To celebrate The Hundred?”

“That’s one of your two questions? I expected something a bit deeper.”

“Of course you can.  I’m sorry, I don’t ever give interviews normally.  I can’t help but have a little bit of fun at your expense as I’m giving one.  Don’t worry, you have your two questions.  Take a little time to think about them if you want.”

“No, I think I know what they are.  The first is can you explain to me, in truly simple terms, how you’ve enabled us to manage faster than light travel? And the second is can you tell me how you came to the discovery?”

“Now those are good questions.  But I’m sure there are ten thousand articles out on the net which will answer the first.”

“Sure there are, but none of them come from the man who actually cracked the problem.  I have a feeling that your answer will be far more valued, and far clearer, than any of the others.”

Now he really did laugh, a deep belly laugh tinged with surprise.  It took a good minute for him to get himself back under control.  A minute during which she sat there politely, wondering what it was she had said that had set him off.

“You want an advanced theoretical physicist to give you an easy to understand answer?” he said finally.  “I can see you haven’t interviewed many people like me!  Most will leave you far more confused than before they answered.  But I’ll do my best.  Let me think… actually I think I can answer both questions in one.  Both how I came to my discoveries, and some idea of how FTL works.”

He took a long swig of his drink, then started talking again.

“Now, this must have been… I don’t know.  Thirty-five years ago?  No, it must be thirty-six.  Where does the time go?  Anyway… it all started with my dogs…”

1 thought on “Faster Than Light Through Muddy Fields”