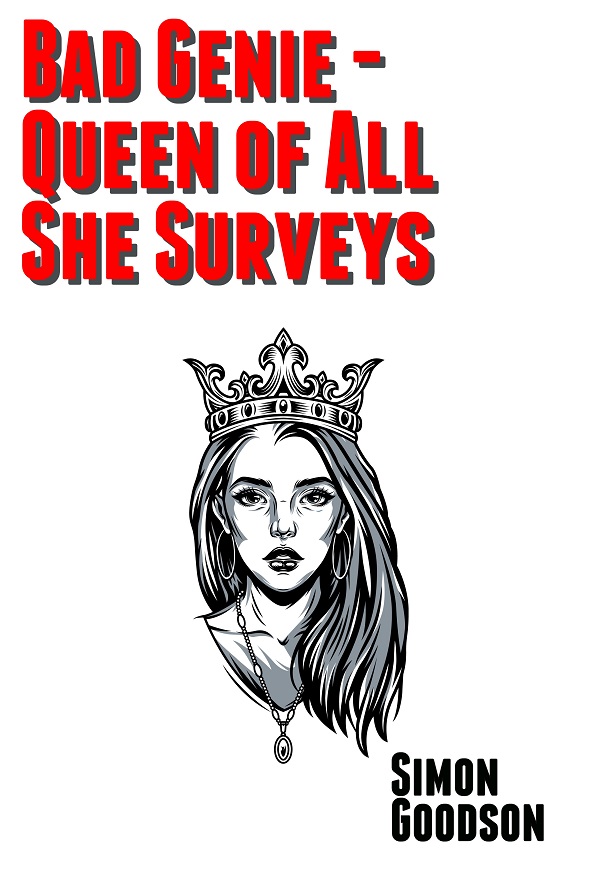 Be careful what you wish for…

Bad Genie – Queen of All She Surveys

Clare eyed him up and down.

“And what does a Genie look like, pray tell?”

“Seriously?  Why does everyone always make that assumption?  Yes, there was a time when genies would dress that way, but that was a very, very long time ago.  We used to dress that way because that’s how people of power and influence dressed, not because we were in fancy dress!  Now I dress like this.”

“Why?  Isn’t this what all the people with influence and position wear?”

“Well, not Richard Branson.  Not Mark Zuckerberg either.”

“Well, putting them aside, this is what people of position and power wear.”

She studied him once more, then shrugged her shoulders.  If he wanted to claim to be a genie, then she guessed he could dress however he wanted.  After all, it was his delusion.

“For heaven’s sake, you’re about to say you haven’t even rubbed a lamp, aren’t you?  Why does everyone believe that story?  That’s not how genies work.  It’s never been how genies work.  We do not, never have, and never will live inside lamps.  Or any other household appliances.”

“Alright then, how do genies work?”

The conversation was ridiculous, but she couldn’t help being intrigued.  Whatever his delusions, at least they had some originality.

She raised an eyebrow and studied him again.

“So let me get this right, you’re going to grant me three wishes?”

Until that moment the possibility of him being a genie, of the wishes being real, had seemed absurd.  Now he seemed to be taking the wishes away she suddenly felt she was missing out on something, and that wasn’t a feeling she was accustomed to.

“I mean that the wishes are not all created equal.  The first two wishes are temporary wishes, the third is different.  The third has a lasting effect.”

“I don’t understand.  What do you mean temporary?”

“How can I best explain this?  Let’s say that your first wish is to be swept off your feet by the latest heartthrob and kissed passionately.  I can make that happen, but only for a short while and the heartthrob in question will never have any memory of it happening.”

“So it won’t really have happened?”

“It will have happened, but only you will remember it.”

She frowned, studied him for a few seconds then opened her mouth to speak.  He raised his hand before she could say anything.

“If you’re about to suggest anything more than kissing, you can stop right there.  Kissing is as far as you can go, with the temporary wishes at least.”

“But the permanent wish… that one would be forever?”

“It would.  And for that reason I suggest you think very, very carefully before making it.”

“So what’s the point of the temporary wishes?”

“They’re mostly there to prove I have the powers I say.  We don’t want those granted wishes to doubt they are real.  We don’t want them to assume it’s a con, and therefore to make the third wish lightly.  The permanent wish is no temporary thing.  There is no undoing it, no changing it, so it should only be approached with the greatest solemnity.”

“And I can make these wishes now?”

“Yes.  In fact you must.  I can’t be hanging around for days or weeks waiting for you to make your mind up.”

She looked him up again and down once more.  He was clearly insane… but what if he wasn’t?  Would it do any harm to make one quick wish?  He didn’t seem dangerous, and… well, what if…?

She made her mind up.

“Alright.  Let’s go with your suggestion.  I have to say I’m very taken by Marcus Marcusson and his latest movie.  I want the full deal, though, I want him kissing me on a tropical beach as the sun goes down, just like at the end of the movie.”

“I can certainly do that.  I’m afraid these things are a little formal, though.  You have to start the wish with the words I wish, and end it with the words Genie, make it so.  That way there are no misunderstandings or half-formed wishes.”

“Alright, then.  I wish to be kissed by Marcus Marcusson on a tropical beach just as the sun goes down, exactly like in his last movie.”

She looked at the genie expectantly, he raised his eyebrows.

The moment the final words were out of her mouth the world about her vanished in a blinding flash.  Moments later she was standing on a beach.  The warm, tropical sun was just touching the ocean.  The sand beneath her feet was still warm, and the sea was lapping softly beside her.

She hardly noticed any of that.  Standing in front of her, even more handsome than on-screen, was Marcus Marcusson.  Before she could utter a word he drew her in close and started to kiss her passionately.

The next few minutes were something of a blur.  She was well aware of what was happening, in fact was enjoying it greatly, but the rational part of her mind had taken a short holiday.  Finally Marcus pulled away, staring intently into her eyes, and told her how much he loved her.  A small part of her wanted to cry out no!  This was how the movie ended.  This was the final moment.  This was…

Another flash of blinding light and she was back to where she had started, the genie standing in front of her and looking more than a little smug.

The genie didn’t say anything, but he bowed deeply from the waist.

“Yes.  One temporary, and one permanent.”

“One temporary.  I’ll remember what happens, but no one else will?”

“Then I know exactly the wish I want.”

She uttered the required phrases.  As she finished, her surroundings disappeared in another flash of white light.  She blinked a few times before her vision cleared.

Except now Natasha’s face was dropping, as was her hair… literally.  It was dropping in big clumps, falling to the floor around her.  And her skin… her skin was sagging, was wrinkling and becoming blotchy.  She started to wail, unable to understand what was happening to her.

Clare started to laugh.  She knew this was only temporary, she knew Natasha would never remember this, but she would.  This would live in her memory for a long time.  This would see her through every time Natasha turned up looking even more perfect than before.  Soon enough it was over, though, and she was back with the genie.

“That was even better than Marcus Marcusson!  So, one more wish… and it’s the big one?”

“No, I know exactly what I want.  I wish to be the queen of all I survey for the rest of my life.  And that doesn’t mean you make me die in a few minutes time, I want my natural lifespan.  And by survey I mean I’m queen of everything I see.  No tricking me into having to become a surveyor or something like that.”

“It will be my pleasure!”

There was another blinding flash of light, and Clare got exactly what she’d wished for.

“Sylvia, my dear.  I’ve missed you.  It’s been months since you came to the home to visit me.”

“I know, Auntie Clare, but I brought someone to see you!  David, this is your great Auntie Clare.  My favourite Auntie!”

Clare put her arms out and took her young grandnephew in her arms.  She stared down at him with her sightless eyes, tears pricking them at the thought that she would never truly see him, never know his face.

She couldn’t really complain.  The final blinding flash from the genie had certainly done what he’d promised.  From that moment onward she had been Queen of all she Surveyed.  He’d made her blind so what she surveyed was absolutely nothing.  The genie had delivered exactly as promised, and he had warned her to think through her wish carefully.

The genie could have told her.  In fact he had, in a way.  He’d told her his kind were attracted to people like her.  People who’d make wishes like her second and third ones.  People who deserved a bad genie.

He might have taken the time to explain it all… but the list of people deserving a bad genie was growing every day… and he was determined to get to each and every one of them.  It was a dirty job… but one he loved!