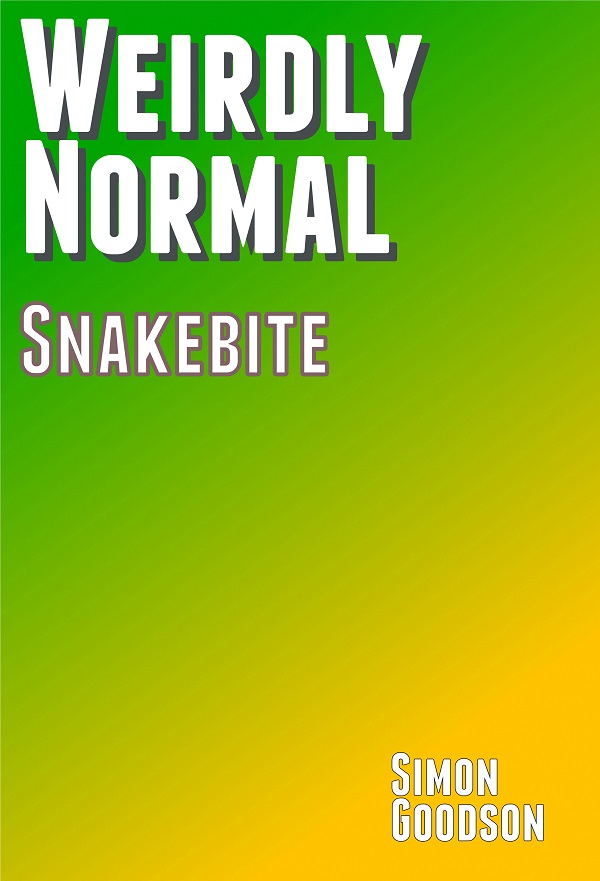 Everyone knows to suck the poison out of a snakebite… but what if you’re a vampire who has sworn off of blood?

Jake frowned at his phone, surprised to be receiving a call from Vincent.  Vincent was off on holiday, doing some form of trek to see wildlife by night.  Being a vampire the night part was compulsory, of course.

Vincent had been insistent that he would be getting away from it all and that his phone would be off the entire time.  So why on earth was he phoning?

Jake picked up his phone and answered it.

The reply was breathless.

Jakes brain burst into action.  The first thing that sprang to mind were the many potions he’d created which would be perfect antidotes, but he wasn’t with Vincent so they were no good.  His mind turned to more practical matters.

“Vincent, calm down.  Listen to me, you need to tie a tourniquet above the wound to stop the poison spreading to the rest of his body.  It won’t solve the problem but it will buy him some time.”

“Vincent, you don’t need to worry.  You’re a vampire.  There’s no way that any snake venom is going to harm you.  You’re perfectly safe to suck it out.”

“You don’t understand.  He tried to get it out by cutting the area he was bitten with his knife.  It wasn’t enough.  He can still feel the poison, feel the burn of it spreading.”

Jake fell silent.  Vampires got a bad rap from humans, even though almost everyone thought they were mythical.  In reality many vampires were perfectly reasonable people.

Actually most were until there was blood involved, but then they were like sharks smelling blood in the water.  Everything became instinct.  Vampires mostly went a long way out of their way to avoid ever being in those situations.

Vincent was a step beyond that.  He had immense self-control and always managed to keep those desires in check.  But this… actually having to suck the blood in, along with the snake venom, and to taste it on his tongue… could even Vincent’s control hold under that provocation?  And what would it do to Vincent if it didn’t?

“Vincent, you have to do what you think is right.  He doesn’t know what he’s asking of you, he doesn’t understand what it could cost you, or what it could cost him.  If you’re in any doubt, if you think there’s any chance you’ll lose control, then don’t do it.  There is another alternative.”

“The tourniquet won’t work in the long term because you have to tighten it so much absolutely no blood was flowing.  That would cause him to lose the leg.  I doubt most humans would have the strength to do that anyway…”

“Yes.  Easily.  He’ll survive, though he’ll lose the leg.  If you’ve any doubts about your self-control it’s probably the only way he will survive.”

“Thank you Jake.  I know it was a lot to hit you with.  You’ve made me realise what I have to do.  I’ll call you back later.”

The line went dead.  Jake stood there, still holding his phone, realising he had absolutely no idea which option his friend was going to choose.  No, that wasn’t quite true.  He was certain Vincent wouldn’t leave the man to die.  The question was whether he’d risk trying to save the man completely or take the safe path, tighten the tourniquet and cost the man his leg.

When the phone rang he actually jumped off the chair slightly.  He saw Vincent was calling, grabbed it and answered it as quickly as possible.

“Vincent?  What happened?  Are you okay?  Is your guide okay?”

“He is fine!” he said.  “The paramedics just took him away.  They shoved him full of anti-venom, but Bob is confident there’s none left in his system anyway.  He says he’d be dead by now if there was.”

“You… You sucked out the venom!  Were you okay with the…”

“Yes.  I’ll admit it was difficult, but I managed to avoid losing control.  The feel of the blood on my tongue… the taste of it… Jake, it was really difficult but I managed it.”

Jake, I’ll tell you how, but if you ever tell anyone else what I say to you now… or if you snigger… I swear I will kill you in a most painful way.”

Jake was shocked by that.  This wasn’t like the Vincent he knew.  What could be so bad?

Jake just managed to stick the phone on silent before collapsing to the floor, choking with laughter.  He’d keep the first part of his promise, he’d never tell their friends or mention it again to Vincent, but hearing the strait-laced vampire come out of with that line was too much for anyone to hear without collapsing in hysterics.