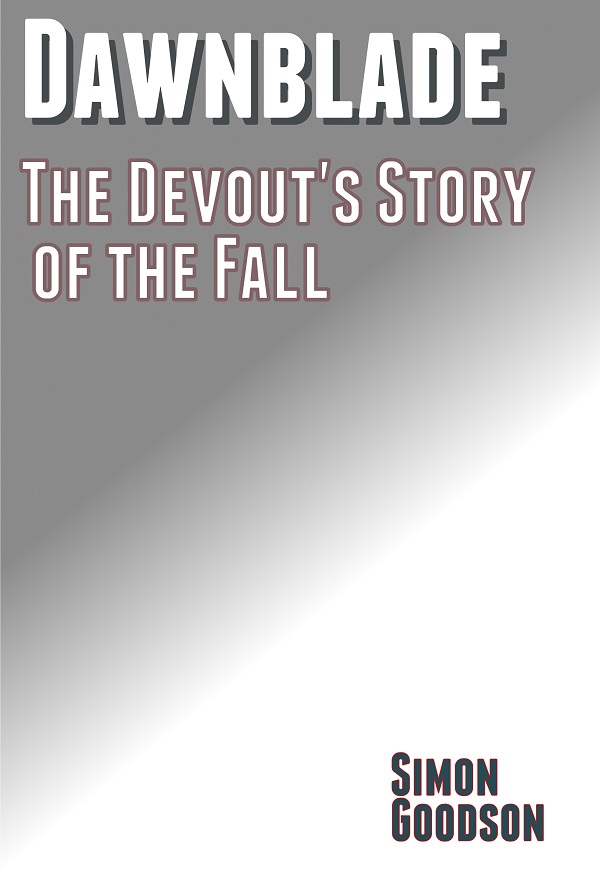 The gods had protected humanity since time began…

…until the Sorcerer tried to destroy them all!

Dawnblade – The Devout’s Story of the Fall

For untold centuries the world was in balance.  The gods — good, evil, and neutral — ruled over the world.  The balance changed over time, sometimes good prevailed and sometimes evil cast its shadow, but always behind it was an overall harmony.

Whatever his background, over time he grew more and more powerful.  Too powerful.  If he truly was a disciple of a god then at some point he renounced his belief, turning instead to his own dark desires.

Powerful he was, but also incredibly devious.  He kept his thoughts and ideas hidden away from the gods and stayed out of their wars.  He took himself off to an empty part of the world and quietly drew others to him, those strong in the power of magic but also those whose speciality was force of arms.

The dark promises he made to draw people away from the gods are lost to history, but their effects aren’t.  Many came to him, and in that dark corner of the world he moulded them.  He made them stronger, and he tied their souls to his will.

In time he became powerful enough that he could have challenged any kingdom and won.  He could even have bested many kingdoms at once.  But such power was still inconsequential compared to that of the gods.  The Sorcerer knew that and became jealous.  He knew that as a mortal the gods would always be above him.

So he decided he must find a way to put himself above the gods.  Or to destroy them.  That should have been impossible for a mortal, no matter how powerful, yet he learnt of a way.

Who knows how he gained that knowledge.  Maybe his continual delving into darkness turned up information that should have remained buried.  Or maybe there was an older and much darker force at work than any of the so called evil gods, a force that wanted to see the balance shattered.

However the Sorcerer came to the knowledge, he quickly put it to use.  Over nineteen days and nineteen nights he wrought mighty spells which drew on the power, on the very life force, of his acolytes.

That was only the beginning.  Those spells were merely to protect his lands, to prevent the gods from thwarting his plans.  He couldn’t stop the gods, of course, but he could slow them down.  He could put enough barriers in their way that he would have time to do what he had to.  At least that was his goal.

On the twentieth day he started his true work, he started the forging of a weapon even the gods would be unable to stand against.  If they tried, they would die.