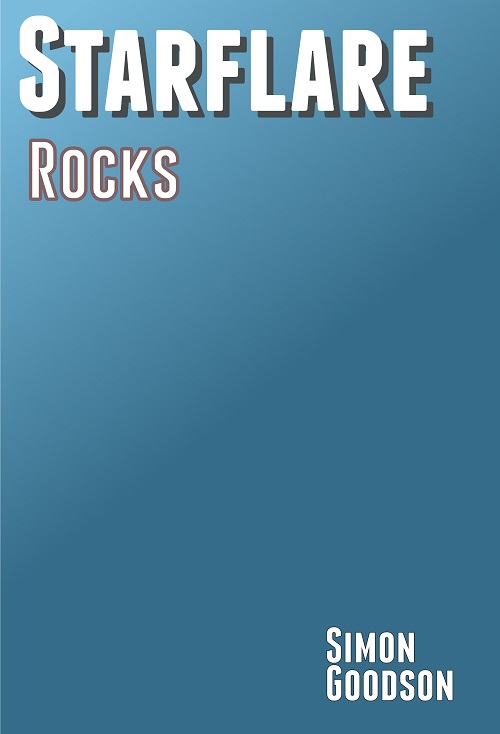 After dealing with ghosts from an abandoned starship, the Panther’s captain plays it safe with a charter from a university to map out an asteroid field.

What could possibly go wrong with that? Well…

“Janine, here’s the next set of coordinates from the professor,” said Joe.

“Great, Captain,” she replied.  “Do you think this can top the excitement of the useless hunk of rock we found this time?  Or the fascinating times we’ve spent staring at empty patches of space while the professor tells us there really should be something there?”

“I know, but his university paid us well for this trip.  Besides, after dealing with ghosts and nearly being stranded in the middle of nowhere I thought you’d enjoy a peaceful job.”

“Peaceful? Yes.  Mind-numbingly boring?  No.  How many more places does he have on his list?”

“I don’t know.  He’s not letting anyone else see it.  Whatever happens we only have another four days on the contract, after that we head back whether he’s finished his list or not.”

“Four days!  I hope I can contain my excitement.”

“At least you’ve got something to do.  Blaze’s troopers were hoping to get some action.  Instead they’re sitting on their hands and bitching.”

“Alright, alright.  Let’s see where we’re going this time.  Oh!  What a surprise!  Somewhere in the middle of nowhere for no apparent reason.  I can hardly wait.”

“Come on, his information was right a few times.  We found something at some of the locations, even if we don’t know why he’s so interested in what was there.”

“There is one thing, Captain.  Everywhere we’ve visited has been pretty much on a straight line.  Not really straight, but pretty close to it.  It’s like something has been through here before and he’s trying to track down objects that were recorded but which might have changed position.”

“That’s interesting, but not surprising.  He must be getting his information from somewhere.  This area of space is way too empty for him to keep lucking out.

“For now, though, you need to focus on getting us to his next set of coordinates.  He complains enough about the time it takes as it is, let’s not delay him any further.”

“Yes, Captain.  Alright… we should be there in a little under two hours.  Can you send Sasha up nearer the time?  We might need her abilities to track down whatever we’re looking for if it’s moved.”

“Sure.  Just don’t tell Doug.  I could do without going over that argument again.”

“I thought he’d cut her some slack seeing as she saved us all from the ghosts, or whatever they were.”

“He did, for about a day.  He’s got a serious chip on his shoulder where she’s concerned, something to do with her abilities, but I can’t get him to open up.”

“You’re the captain.  You can just order him to tell you.”

“This isn’t the navy.  If I tried that with Doug he’d tell me where to stick the order in no uncertain terms.”

“Me too.  Not too often, though.  At least now we get to choose what trouble to get in rather than having it dumped on us.”

“And ain’t we just great at finding it?”

“Not this time.  This is just a simple survey mission.”

Joe nodded.  He hoped the same.

The screen in front of them showed a chaotic group of asteroids, tumbling around each other with frequent near misses.  Occasionally one of the smallest would be struck by a larger asteroid, sending chunks of it spinning off in different directions.

They were stood together looking at the screen.  Doug was there too, though staying back and not getting involved in the conversation.  Sasha was aware of him sending frequent glances her way but she refused to meet his gaze.  She knew he had a problem with her.  She didn’t need to keep being reminded.

The professor was with them too, but he was too wrapped up in what he was seeing to comment.  Sasha stole a glance at him.  He was tall, though he didn’t seem it because he stooped over.  His unkempt grey hair matched his lined face but his eyes still burned with passion.  Especially now.

“What’s wrong with it, Captain?” she asked.  “It looks just like the asteroid fields I’ve seen before.”

“You mean in films?” he replied.  “They look fine unless you’ve been through a real asteroid field.”

“So what’s the difference?” she asked, annoyed at his tone.

“Space.  Distance.  You can fly through most asteroid fields without even seeing a single rock, definitely without seeing two or three close together.  This sort of field can’t last for any length of time.”

“Gravity,” replied Janine.  “The lumps of rock pull on each other, drawing together and starting to form larger groupings.  Those larger groupings pull towards each other, sweeping up the smaller bits of rock near them.  It’s how planets form in a solar system, though on a much smaller scale.  Sometimes the interactions will send a rock flying away into space, but the end effect is the same – and nothing like what we’re seeing here.”

“The only time I’ve seen something like this is in the aftermath of a massive collision,” said Joe.  “If two large bodies smash together then the forces can shatter both.  Over time they’ll be drawn together into a single object but for a short time, relatively speaking, you’ll see this.”

“So that’s what happened then,” said Sasha.

“Out here?  In the middle of empty space?  How would two objects possibly collide, and do so at a high enough speed to shatter?  The odds of that happening rather than them shooting past each other are astronomical.”

“Which is why we are here,” said the professor, surprising them all.

“You want to know how they collided?” asked Joe.

“Partly, Captain.  I also wanted to see what object they had created by recombining with no significant gravity from any other objects to influence them.”

“I think you’re a bit early for that, Professor.  Maybe come back in a few hundred years.”

“I did.  In fact it has been three thousand six hundred years since this was first observed.”

“What?” asked Janine.  “What are you talking about?”

“Oh, not by me, of course.  I know I am old, but I’m not that old.  No, I’m referring to the records of a generational ship that passed this way.”

“That’s why the places we’ve visited have been on a straight line!” said Janine.

“Indeed.  The ship finally reached its destination system earlier this year.  You can imagine their surprise and disappointment when they found that not only weren’t they the first to reach the system, but that it had been settled for over three-thousand years.  When they learnt the journey they’d made could now be completed in just a few days many of them cried.

“My university took them in and provided shelter and support, trying to help them come to terms with what had happened.  As part of that we gained access to the records of their journey.

“While most of their time in space was depressingly boring there were a few bright glimmers amongst the dross.  Objects and events worth investigating.  We could have sent our own ships to follow them up, but we decided it was better to hire a ship whose crew were used to travelling in such areas.  Your ship and crew fit the bill exactly.”

“That’s not possible,” Janine said.  “There is no way those rocks have been tumbling around each other for more than three millennia without starting to combine.”

“It is intriguing, isn’t it?  Did they start to combine then get split apart again?  Has something passed through which prevented them combining?  Is there some unknown aspect of physics at work here which we never normally see because other far more massive objects, planets and stars, interfere?”

“Well, Captain, I’m afraid you’ll have to put up with it.  My university hired you and your ship to explore exactly this type of phenomenum.  Failure to do so will leave you liable to a large penalty clause when we return.”

“Not if there’s a danger to the ship.  In that case the contract goes out the window and I do whatever needs to be done to keep everyone safe.”

“Indeed.  And what danger do you think we face?  These rocks are certainly presenting strange behaviour, but where is the danger to your ship or crew?  I can assure you having a bad feeling is not sufficient grounds to scrap the mission.”

“Well, I think the first thing is to take a closer look.”

“I knew you were going to say that,” she muttered.  Then she turned to Joe.  “Tell me Captain, how exactly is this different from the Navy giving us crappy jobs to do and us having no choice but to do them?”