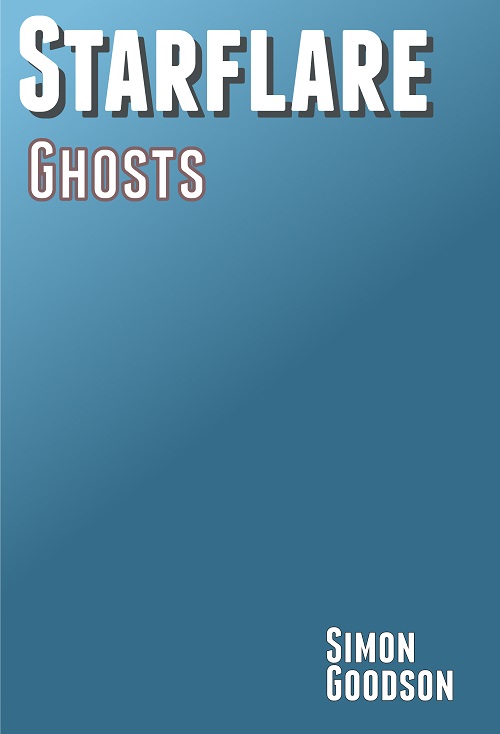 An abandoned starship populated by phantoms.

The Panther’s captain doesn’t believe in ghosts… but that doesn’t stop them coming aboard!

Sasha’s fingers flew across the keyboard entering coordinates, then she slumped back in the chair, sighing heavily.  She blinked her eyes repeatedly, her focus slowly returning to her surroundings.  She lifted a hand which still felt like stone, trying to rub away the headache that had settled in behind her eyes.

“You know I can’t answer that, Captain.  It’s the right size and it’s moving slowly, so it isn’t in hyperspace.  I sensed a lot of metal.  It’s probably a ship.”

“Like the last two you found?” Doug asked, pitching into the conversation.  “Two lost bloody asteroids, both packed with metal we don’t have the resources to mine and both too big to bring aboard.”

“Hell, it ain’t that hard,” Doug snapped back.  “There’s plenty of outfits that get by fine without your… skills.  Maybe we should do things the same way they do?  Maybe…”

“Doug, butt out,” growled Joe.  “You know as well as I do they spend months trawling just to find half as many hits as Sasha found us in two days, and they still have to check them out just the same as we do.”

“Seriously Captain, she oversold herself.  It wouldn’t surprise me if she’s just memorised the location of some rocks.  We should dump her off when we’re back in port again.”

“That’s enough!  You worry about the fighters and pilots, that’s what you’re here for.  Now get off her case.”

Doug stood up and wandered away, grumbling under his breath.  Joe decided to let it go.  He’d learnt the hard way that a critical skill for a captain was knowing when to stamp down and when to let things go.  Too much time spent cooped up on a ship made everyone’s nerves fray, and ultimately his crew obeyed because they chose to, not because they had to.  That had been a hard lesson to learn when he left the navy.

“Do you think it’s a ship then?” he asked Sasha.

“I can’t say for sure.  It’s a much stronger feeling than the other two.”

“Is there any danger?”

“I don’t know!  I’m not a bloody fortune teller.  I can find where things are, I can’t tell you what they are.”

“Sorry, just thinking out loud.  Ignore Doug.  We’ll still make some cash from those two asteroids you found by selling the location to a mining company.”

“He doesn’t think so,” she said, nodding her head towards where Doug had ended up standing.

“He’s just frustrated because he’s had nothing to do yet.  Just ignore him.  If he carries on like that I’ll sort him out.”

“I can take care of myself, Captain!”

“I’m sure you can, but that kind of sorting out leads to more trouble.  Doug can be an arse but he’s an important part of this crew.  If he’s causing you problems then you let me know, alright?”

“Aye, Captain,” Janine replied.  “It’s not far and the hyperspace drive is already charged.  We’ll be there in ten minutes.”

Janine stood, heading for the flight deck.  Joe followed.  He wanted to see the contact as soon as they arrived.  Despite his words to Sasha, he was starting to wonder if taking her on was such a good idea.

It had all seemed to make sense at the time.  Running cargo made them regular money but his crew needed variety.  Doug and his eight fighter pilots needed to do more than just routine patrols and the troopers needed to do more than just guard the ship while cargo was loaded and unloaded.  Salvage jobs were more lucrative and gave both the pilots and the troopers something interesting to do.

The only problem was finding ships to salvage.  That’s where Sasha came in.  Joe had heard of people with her talent before, a form of psychic power which let them find objects in the vastness of space between systems.  He’d got talking to her in a bar when already more than merry, and by the end of the evening he’d offered her a job which she’d accepted.  In the cold light of day he’d started to have doubts but it was too late — Sasha was already aboard the ship.  They’d gone ahead with the plan.  So far it had been a big bust. Still, Sasha seemed more certain this time.  He told himself this one would be a ship.  It had to be.